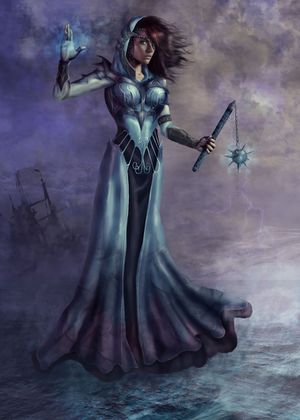 "Do not attempt to control the tempest, for it is a thing to be revered in itself. Instead, revel in its untamed power, and use it to become one in spirit with me." -The first doctrine of Mist

Clerics of Mist believe in allowing nature to run rampant in all of its chaotic glory. They glory in the power of the cyclone, the ferocity of the storm, and the unpredictability of the weather. Though followers of Mist adhere to this and generally identify with such violent natural phenomena, they also respect individuals who struggle against such adversity. Those who use ingenuity and perseverance to overcome such natural adversity are highly respected by Mist's representatives.