From The World of Layonara
Jump to navigation Jump to search 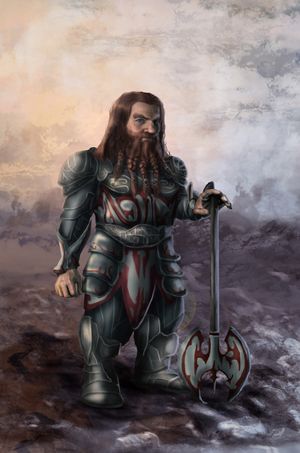 "Hennkeson group, roit! Cap'n Fairnback, left! Cap'n Stoneangle, dig in center, an' you! Git yer group round back fer tha flank! Let's show 'em what we got boys! Red axes up!" -General Longpike, directing a skirmish with Co'rys forces near the border to the Ulgrids

Let bravery, valor, and honorable war define you. Maintain and uphold the morals of your people. Do not allow pacifism or idleness to infect you; for any ideal worth having, is worth fighting for. Idle minds are fertile grounds for schism. Idle hands become soft and unsuited for battle. You are the embodiment of what it is to be a dwarf--be eternally vigilant of this fact and do not allow the lax and decadent ways of other races to influence your heritage.

"Vorax honors all who believe in bravery, war, and valor. He despises weakness of character, believing one should have strong moral values. He hates pacifism, as any morals and ideals worth having should also be worth fighting for. He loathes an idle mind, as it becomes fertile ground for doubt to grow, and he equally hates an idle body, as it becomes soft and unsuitable for the rigors of war. Above all, he abhors dishonorable and deceitful tricksters*. War should be fought for righteous causes and won through honorable battle. War is a sacred rite for followers of Vorax; as such, war is never entered into lightly. War should always be an option of last resort and should only be engaged in for the most just of causes. Once engaged, a war should be fought strictly by the established rules and the righteous cause must be made victorious. There is no shame in losing a battle, but there is great dishonor in losing a war. To lose a war is to fail the just and the righteous, therefore, to fail the Father of Battle. Because war is so sacred, the tools of war are sacred instruments. Thus, treat weapons of war with great reverence. To encompass all of this, we who follow Vorax must have a strong and just moral character. We must be like the Eternally Vigilant himself, keeping our bodies and minds prepared at all times to defend our people." - Introduction to a War Priest College, by Captain Falkin Cartman